Chat with us, powered by LiveChat
Back to articles
History

The Château du Molay: Over 250 Years of History

Surrounded by history, the city of Caen, the medieval town of Bayeux and the D-Day Landing Beaches offer numerous study opportunities.

However, it seems we don’t need to look much further than the walls of the Château du Molay itself for a history lesson! Gemma and Lisle, head the Château team, dived into the past of this historic building to uncover the secrets and stories that have bridged over 200 years.

The heart of Normandy’s woodlands would be the location for a young Jacques-Jean le Couteulx du Molay’s (1740-1823) first sizable residence as he and his wife, Geneviève-Sophie le Couteulx de la Noraye, built the Chateau close to his birthplace in Rouen in 1758.

An officer to King Louis XV, Jacques-Jean was a wealthy banker and looked to create his own dynasty with his first son, Jacques Félix Le Couteulx du Molay (1779-1812).

Though Jacques-Jean and Geneviève later divorced, the family bought the famous Château du Malmaison located west of Paris which they later sold to Josephine Bonaparte after the French Revolution.

When studying the façade of the Château du Malmaison, similarities with the stonework can still be seen today at the Château du Molay. This is just one example of the notable historic features that remain at the Château, carefully looked after by the current team, who look to restore original features while ensuring school groups have access to the latest facilities for an enjoyable stay.

Along with a number of colourful inhabitants, the Château has seen its fair share of face-lifts and transformations in its time. One such owner who had a love of art and a passion for creative literary works was Edouard Crousel, Count of Chabrol.

During the reign of Napoleon III, Crousel was a member of the House of Peers and Prefect of the Seine region of Paris. Music lovers amongst us may recognise the name of the French composer Vincent D’Indy who would turn out to be the grandson of Crousel.

In 1833, Crousel took it upon himself to extend the Château and develop its features which have been preserved to this day. Decades passed but the Château’s beautiful features remained as ownership passed onto the Viellard family towards the end of the 19th century. It would take only another 50 years for the Normandy region to fall into the dark days of the German Occupation during World War II. Commandeered by the German Army, Le Château du Molay would see its purpose quickly transform from a place of tranquility and prestige to a military site.

German V-weapons, or Vergeltungswaffen, were long-range rockets designed to pinpoint certain target areas. The end result would be total destruction and a reign of terror on those within a wide radius causing countless casualties.

One such example of the weapons designed was the V2 weapon. The Balleroy and Molay-Littry areas were two of the intended sites for the German V-weapon installations, with the grounds of the Château designated as one of the launch zones. Only the invasion of Normandy prevented the launch of these weapons, which could have changed the course of the war and how we live today. 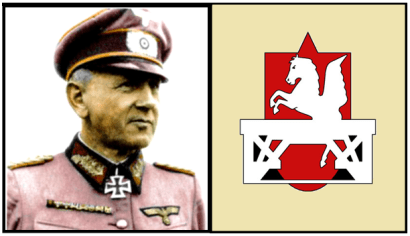 German General Dietrich Kraiss (1889-1944) and the insignia of the 352nd German Infantry Division.

Commanding Officer of the German 352nd Division, General Dietrich Kraiss had seen action through World War I, as well as the Eastern Block in November 1943.

From the German headquarters (HQ) in Normandy, Kraiss moved 15 miles north-east to the Château du Molay upon receiving orders from the infamous Field Marshal Rommel to position the division closer to the coast. Anticipation grew among Axis for the impending invasion of mainland Europe by the Allies as the German Army looked for reinforcements along the coast. Kraiss had selected the Château for his HQ due to its central location within his command area that stretched from Isigny to Asnelles and met with Rommel at the Château on several occasions in order to report on the current state-of-play within the Normandy region.

As the German Divisions became increasingly strained along the Eastern Corridor, the continuous struggle against the Russians drew on more German reinforcements. This left the French coast defenses weak with Kraiss’s 352nd Division hanging onto its position. Despite being under strength, the 352nd fared better than most with experienced Officers at the helm. Responsible for a host of coastal areas including Grandcamp, Omaha Beach, Port en Bessin and Bayeux, Kraiss would end up facing the Americans on Omaha Beach and the British on Gold Beach come D-Day.

After weeks of fighting, the 352nd Division struggled to hold their line which was broken down by the Allies. Kraiss and the 352nd could no longer function as an effective unit as the Allies soon approached the German HQ at the Château. Fighting to the death to delay the American overhaul of St Lo by 5 weeks, General Kraiss would receive the posthumous award of the Oak Leaves for his actions in the German defense as he became one of the estimated eighty thousand Germans killed during the Battle of Normandy.

Following Success on the Beaches

Tournieres is a small village approximately 2 miles away from the Château du Molay. Just outside the village, General Eisenhower established his first HQ in France (code-named Shellburst) in July 1944. Many important meetings took place at Shellburst and an airstrip was constructed in order to fly in delegates such as Winston Churchill. Following the success of the landings on June 6th 1944, the Red Cross established a temporary presence within the Château. 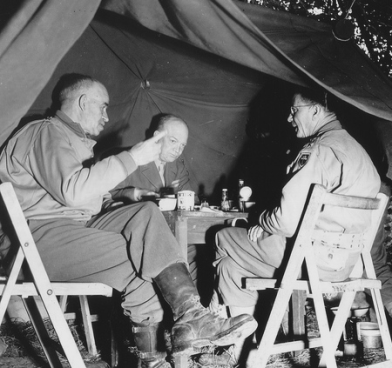 General Eisenhower stops for tea with General Bradley and an Officer from the American 79th Infantry Division.

After the war, the Château du Molay became a boarding school for girls before Citroen used the site as a summer camp for their employees. In 1978, the Château faced another makeover with its interior renovated to create a 3* hotel.

With a desire to provide the perfect base for school groups visiting France, the Château du Molay was purchased by Travelbound in February 1993. The history of the Château du Molay continues with new groups enjoying the fantastic facilities that extend beyond the building itself. An outdoor swimming pool, multi-sports court and rugby pitch and numerous on-site activities means the Château can accommodate a range of groups exploring the Normandy and Paris areas. The splendour and tranquillity of the Château du Molay and its grounds have returned and are ready to welcome you.

Learn more about visiting the Château and how we cater for school trips of all subjects.