LA synonymous with the film industry and Hollywood Glamour but Los Angeles offers so much more! Entertainment and performing arts certainly but also art, music, science and geography to excite and enthral your students.

Learn about Space at the California Science Center

Go Behind the Scenes at Warner Brothers Studios

Our top three excursions for this trip were the Capitol Building, the Empire State Building and Ellis Island. The students found the New York excursions the most inspiring.

* Please note, entrance fees for the featured excursions and guides as detailed are included in typical price.

Recommended excursions while you're in Los Angeles

Students can see for themselves the famous places so often seen in films and on TV. Beverly Hills is the stomping ground of the rich and famous and the glitzy Rodeo Drive is where they come to shop. Or take a trip down Hollywood Boulevard and see the famous names on the Walk of Fame, a tribute to artists working in the entertainment industry.

A chance to get a behind the scenes glimpse at this popular film studios with a knowledgeable guide. See outdoor sets and soundstages from well-known film and TV productions such as The Big Bang Theory, La La Land and Friends. The tour includes displays of props, costumes and vehicles including the Batmobile Collection. There is a working replica of the Central Perk Café from Friends.

Go behind the scenes on the legendary Universal Studios tour to explore Hollywood’s most famous backlot. Students climb aboard trams for a video-hosted tour that shows them Jaws lurking beneath the waters, explosive special effects of the Fast and the Furious, Wisteria Lane from the hit series Desperate Housewives and the legendary Bates Motel from Psycho.

Enjoy the relaxed atmosphere of the walkable town of Santa Monica north of Los Angeles. Attractions include the sandy beach and famous pier, the Pacific Park amusement park, Looff Hippodrome Carousel and Santa Monica Pier Aquarium. The original muscle beach is located next to the pier.

Head to the popular Six Flags Magic Mountain Theme Park 35 miles northwest of downtown LA. The Park is best known for its many roller coasters and has featured in film and TV productions. Themed areas include DC Universe inspired by the comics, Bugs Bunny World inspired by Looney Tune characters and Rapids Camps Crossing, a campsite set deep in the American wilderness.

Take a guided walking tour of downtown LA to see some great street art. Los Angeles is a city of a thousand murals and graffiti filled alleyways. Guides are artists who will share their knowledge and enthusiasm for their communities.

Half day See on map
08 The Getty Villa

The Villa is an elaborate recreation of a first century Roman country house designed to house J Paul Getty’s extensive antiquities collection dating from the end of the stone age to the fall of the Roman Empire. There are approximately 44,000 Greek, Roman and Etruscan antiquities.

Located on Museum Row this is the largest art museum in the Western United States with over 150,000 works from ancient times to the present day. The collection includes European, Japanese, Islamic and Latin American Art. Amongst the most popular exhibits are Chris Burdens Urban Lights sculpture (2008), Weeping Woman with a Handkerchief by Picasso and the 17th century Virgin of Guadalupe by Manuel de Arellano.

Enjoy amazing views of the city and the Hollywood sign from the Griffith Observatory on the South facing slope of Mount Hollywood. The Observatory is open to the public and exhibits include the largest astronomical image in the world, pieces of meteorite and the Tesla Coil. The lawn and terraces also have exhibits. Live shows are held each day in the Samuel Oschin Planetarium.

This interactive science centre focusses on inventions, innovations and life science. Four major exhibition areas are the World of Life, Creative World, Ecosystems and the most famous exhibit the Space Shuttle Endeavour. Learn the story of the space shuttle programme and its links to California. Amongst the many air and space exhibits see Endeavours Galley, Space Potty and a nose cone from a space shuttle external tank.

This is an active Ice Age dig site and museum right within the city. Animals such as the American mastodon, sabre-toothed cats, wolves, ground sloth and ancient bison became trapped in the tar here and preserved. Many fossils are on display in the museum and recently excavated fossils can be seen in the fossil Lab. Discover the Lake Pit and the Observation Pit where fossils are still embedded and the live dig site.

Take a half hour guided walking tour of the “Home of the Academy Awards” (The Oscars). Visit the Dolby lounge and see a genuine Oscar statuette and images from past Award ceremonies. Walk the “Winner’s Walk” where winners photos are taken. This famous theatre is also the concert venue for many global superstars and the home of events such as America’s Got Talent and the American Idol.

This historic 1930’s open-air land mark is a great place to get something to eat with dozens of food stalls and specialty shops. There are many small family run businesses that have been in the market for years. A favourite meeting place the market caters for all tastes. There are plenty of other shopping opportunities around the market.

Focussing on the history and winners of the world-renowned Grammy music awards this interactive museum also aims to educate about musical genres in general. Inspiring exhibitions Interactive touch-screens, videos, and recording booths are used to explore the history and cultural significance of popular and classical music. 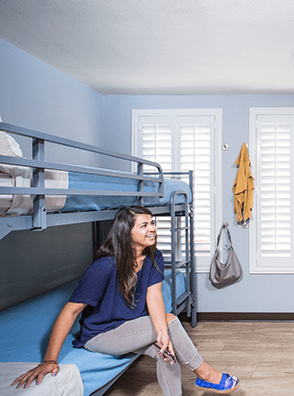 Learning outcomes gained from a cross-curricular trip to Los Angeles

Students will have an opportunity to:

Buzzing, cosmopolitan American cities contrast with the epic and awe-inspiring natural landscapes will wow students of all subjects and interests.

Combine the major conurbations of the West Coast with some of the world’s most awe-inspiring natural landscapes, including the Grand Canyon.

Looking to provide your students with even more learning opportunities across some of North America’s biggest cities?

A trip of the US East Coast offers an amazing range of learning and personal experiences.

History buffs will adore Boston – birthplace of the United States – and all students will come back home being able to relate to modern global politics after their time in Washington, DC.

And who doesn’t love the bright lights and cutting-edge culture of New York City?

Travelbound understand the complexities of booking an international school trip and are here to make organising your experience as easy as possible.

• We deal direct with all of our suppliers – many of whom we have a great relationship with for many years – so there are no middlemen mark-up costs.
• You’ll speak to travel advisors who can provide you with a must-see list of things to do and personal tips on how to make the most of your visit.
• An in-city representative is on-hand 24/7 to groups in main travel periods to handle anything unexpected.

You can choose to stay in each city as long as you’d like and add as many stopovers as desired. Why not spend a few hours in Philadelphia on the iconic Rocky steps?

As well as a range of meal and accommodation options, you can pre-book any number of excursions and guided tours. Or you’re free to explore on your own – whatever your budget, we can make an East Coast tour to match!

How can we help you organise your trip to Los Angeles