Sitting at the crossroads of Europe, Asia and Africa, Cypriot cuisine has many influences rich in both style and flavour that will give your students an understanding the importance of cooking within different cultures.

Learn how to make traditional Moussaka

The divided city of Nicosia

Cyprus is known as the island of Aphrodite the Greek goddess of love and beauty.  See the rock on one of the most beautiful coastlines in Cyprus where according to Greek mythology Aphrodite rose from the waves.

Traditional Geroskipou village is in an area believed to have been a beautiful garden in ancient times. Today the village is known for the production of Cyprus delights sweets. Visit a family-run ‘Cyprus Delights’ factory where students will have the chance to see the production, tour the factory and ask the manager questions.

The town of Paphos on the southwest coast of Cyprus is a UNESCO World Heritage Site. Inhabited since Neolithic times, the town has many archaeological sites with several sites relating to the cult of the Greek goddess Aphrodite.  See the fabulously preserved mosaics in the “House of Dionyssos”, and the picturesque fishing harbour.

The villa’s mosaic floors date from 2nd – 5th century AD and are considered amongst the finest in the Eastern Mediterranean. They depict scenes from Greek mythology including the God of Wine.

Kolossi Castle is a former Crusader stronghold established in the 13h century located to the west of the city of Limassol. The Castle was the Grand Commandery of the Knights of the Order of St John of Jerusalem in the 13th century and of the Knights Templar in the 14th century.  The castle had a mill for the production of sugar from the local sugarcane, which stood as one of Cyprus’s main exports during the Middle Ages.

Featuring traditional architecture, Omodos with is a wine producing village on the southern slopes of the picturesque Troodos Mountains. See the monastery of the Holy Cross with its icons and wood carvings and the old wine press. Visit a local winery to learn more about the traditional wine making processes used in the region.

See on map
08 Cookery lessons at the hotel restaurant

The hotel chef will show how to make moussaka and another traditional local dish. Students will have the chance to take part in this lesson. Moussaka is traditionally made with lamb, aubergine, béchamel sauce and grated cheese and it is believed to have Arabic origins.

Halloumi is the signature cheese of Cyprus which is now also very popular overseas. Its name comes from the Greek word ‘ almi ‘ meaning salty. The cheese is made from cows, sheep or goat’s milk and is usually served grilled as it does not melt. Visit a Goat farm and watch how a family produces the local cheese in a small family factory.

Students can see a large high-tech factory used for the production of milk, cream, Halloumi cheese and other dairy products. With a turnover of over one hundred million euros, 550 staff and collaboration with many of the islands dairy farmers, this is Cyprus’s largest exporter of dairy produce with the main export being halloumi cheese. Image by Jules – CC by 2.0.

Situated in the centre of Cyprus, the island’s capital Nicosia, is divided with part of the city under Turkish occupation. The tour includes a visit to the dividing “Green Line.”  The best known area in Nicosia is “Laiki Yitonia”, the 19th century quarter which has been restored to its former glory.

Limassol was built between two ancient city kingdoms Amathus and Kourion. During Byzantine rule, Limassol was known as Neapolis (new town). Limassol’s historical centre is located around its medieval  Castle and the Old Port. Standing as Cyprus’s second largest city, Limassol is considered the centre of Cyprus’s wine industry and a major tourist resort. 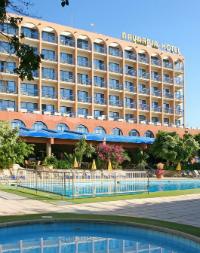