Come discover Normandy with Travelbound and make your school trip a memorable experience. We can tailor your itinerary to meet a wide range of learning objectives, and we love a challenge, so let us know if you’re looking for something new in between your Normandy favourites. We’re happy to add your suggestions in!

We welcome any ‘hidden gems’ that schools stumble across on their trips, so be sure to tell us about any once you’re back!

Milking goats at a cheese farm

I could not have asked for a better tour coordinator. Laura was superb throughout the whole process and was always very efficient in getting me the information and answering any of my questions.

This long embroidered scroll is the most important relic to survive from the 11th century. Students can see the epic story of William of Normandy’s conquest of England in 1066, and consider the French and British interpretation of events. Tip: A workbook is available in French for MFL students. A workspace can be pre-booked for one hour for school groups with a replica tapestry image.

This Memorial helps students study our shared past and introduces emotion and memory, using dynamic and diverse educational activities. It is possible to book a guide (at a supplement) to accompany the group on their coach to see the battlefield. Optional workbooks and workshops are also available. A 360 degree 17 minute film to promote an understanding of our common European History opens on the 6th June 2019 to mark the 75th anniversary of the D Day Landings and the Battle of Normandy.

This is the largest of the 18 Commonwealth military cemeteries in Normandy. It contains 4,868 graves of soldiers from the UK and 10 other countries – including Germany. Many of the soldiers buried here were never identified, and the headstones are simply marked ‘A Soldier Known Unto God’. Students can reflect on the sadness, sacrifice and honour of war.

This museum and cultural centre shows the war effort made by Canadians, civilian and military, both at home and on the various fronts during World War II. Students can engage with the exhibits, which draw on documents, photographs, maps, artefacts, audio-visual and audio accounts. The many faces of contemporary Canadian society are also explored.

Pegasus Bridge was captured by British forces on the night of 5-6 June 1944 in order to protect the eastern flank of the landing operations at Sword Beach. At the Pegasus Bridge Museum, students can learn about the events of its capture and the forces that carried it out via displays of historic items such as weapons and gliders, documents and photographs.

Mont Saint-Michel, a gothic Benedictine abbey, is perched on a rocky islet amid vast sandbanks exposed to powerful tides. Over the years the island’s abbey has served as a prison, a fortress against the English and a monastery. As well as the abbey, your group can explore the medieval buildings of the village that grew up beneath its walls, along with stunning views.

The Normandy American Cemetery and Memorial covers 172.5 acres and contains the graves of 9,387 military dead, most of whom lost their lives in the D-Day landings and ensuing operations. The memorial, set around a bronze statue, shows maps and narratives of the military operations. Visitors’ centre staff are available to answer students’ questions.

The 19 minute film ‘100 days of the Battle of Normandy’ is projected in High Definition on 9 screens. The film tells the story of the military planning, preparation and execution of the Battle of Normandy thanks to archive images gathered from English, Canadian, German, American and French archives. The Battle started with the landing of the paratroopers the night of the 5th to the 6th of June 1944, followed by the landings of troops on the Normandy beaches and lasted for three months. The end came with the liberation of Paris and the bombing of Le Havre.

The theme of this amusement park is based around the historical events of 1066 and proves to be hugely popular with visitors. Students can let off steam on the roller coaster, waterborne dodgem cars and water flumes. There are also cinemas, daily live shows and gardens with snail-shaped vehicles on fixed tracks that take visitors on tours. Seasonal opening and excellent for younger students.

Students visit a French market, bursting with delicious local produce. While they are there they have an assignment to complete. Each student is given three Euros and has to use their French-speaking skills to buy ingredients to make a cold lunch back at the château. After they have prepared the meal, it is then judged by the château’s head chef.

This major tourist attraction in Cherbourg is devoted to the adventure of man and the sea and the thrill of the depths. Explore the beauty of the oceans and their essential role through three floors of spectacular multimedia displays and 17 stunning aquariums (opening 2019). Come aboard the submarine Le Redoutable for a unique experience. Relive the final hours of the Titanic. Workbooks and workshops available.

This is a working goat farm that allows students to see how dairy products such as milk and cheese are produced. Students can play with the goats and learn about the cheese making process. It’s a great way to find out more about the traditional produce of the area and also presents a good chance to practice language skills and develop vocabulary. The visit includes a short educational film, a talk and a cheese tasting. Visit can be conducted in French or English.

You can choose from a range of fun and educational activities and experienced chateau staff are on hand to ensure that the students are having fun all day and night. Activities can include: archery, a blind trail walk, survival skills, initiative exercises, using various sports facilities for sporting games (such as the seasonal outdoor swimming pool), planting a tree and circus frenzy to name a few.

Half day See on map
14 The British Normandy Memorial

The British Normandy Memorial officially opened on the 6th of June 2021 as a place for remembrance and reflection.

Overlooking Gold Beach, just outside  Ver- sur- Mer, the Memorial records the names of 22,442 servicemen and women, under British command, who fell on D- Day and during the Battle of Normandy.

A series of stone carved columns bear the names with the ‘D-Day Sculpture’ a set of bronze figures by British sculptor David Williams-Ellis, occupying a prominent position.

The site also includes a French Memorial, dedicated to the memory of French civilians who died during this time.

In the heart of the D-Day beaches, Arromanches is renowned for its ‘Mulberry’ artificial harbour. Its remains speak of the remarkable technical feat of taking 600,000 tonnes of concrete and equipment across the Channel in wartime to serve as a base for Allied troops. The museum uses models, videos and a diorama that movingly bring life to the displays.

William the Conqueror was born at this castle in about 1028 and grew up here. Students can visit the ruins and follow the prosperous times and disasters the castle has seen – intermittent fighting in the Hundred Years War from 1337-1453, and again in 1944 bombing raids.

Tip: There are educational tools available to complement the visit.

The German artillery battery at Longues-sur-Mer was destroyed by Allied forces on 6th June 1944. Made up of 4 block houses and an observation post looking out to the sea, this is the only battery with its guns still intact. Longues-sur-Mer is one of the most important parts of the Historical Route of the Battle of Normandy at the heart of the allied assault sector between Omaha and Gold Landing Beaches. 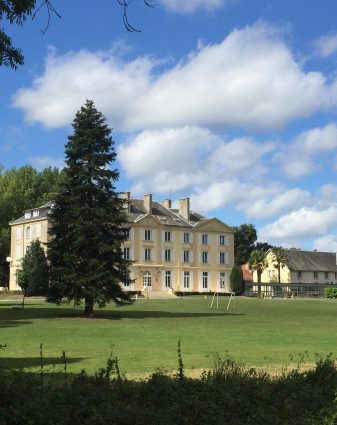 Our exclusive 18th century Château du Molay can accommodate 195 guests in 42 en-suite bedrooms and is set amongst 38 acres of beautiful private parkland.

Located only 14kms from Bayeux, within easy reach of the world famous Calvados coast and just a 45 minute journey from Caen, the Château is in an ideal location for easy school trips from the UK.

A school history trip to Normandy will uncover the realities of World War 2 in the area’s monuments, bunkers and cemeteries.

The Château du Molay is perfectly located for sites of historical significancei including the Bayeux Tapestry, Caen, and Arromanches for the story of D-Day.

The Chateau du Molay for your school trip to France

Barcelona has so many passions to discover, from football to fashion, art, architecture and language. It is a perfect hub for every subject which makes it a great option for a multi-subject school tour.

Amsterdam is packed full of educational activities that cover a range of subject and learning objectives. Students will love the short hop over to experience a new city and soak up a different culture away from the classroom.