Munich’s Christmas Market, whose roots go back to the 14th century, is held in the heart of the city centre. Students will love to practice German and purchase presents.

Price Typically £422 Price per student Based on a 4 day, 3 night tour for 30 students, travelling in December 2022
Schools - Berlin - Generic

Return flights UK to Munich
Return overseas airport coach transfer
Accommodation, half board
Insurance
1 teacher place for every 10 students
24/7 assistance during your trip

Munich’s Christmas Market, whose roots go back to the 14th century, is held in the heart of the city centre. It offers traditional Bavarian and unique Christmas gifts, including wood carvings, gingerbread and some exquisite glassware from the Bavarian Forest. Each day, from the balcony of Munich’s town hall, music lovers will be able to enjoy the festive season with an alpine Christmas Market concert.

Munich is the capital city of Bavaria and packed full of historic buildings, great museums and art galleries. Different periods of international art are covered in the cities celebrated museums including the Alte Pinakothek, the Neue Pinakothek and the Pinakothek der Moderne. The Deutsches Museum is the world’s largest exhibition of technology and science, and guided city tours can be arranged.

Tthis landscaped park and former site of the 1972 Olympics is now a much loved recreational space featuring an indoor pool and ice rink, lakes, bicycle paths, concert venues, restaurants and a football stadium. The 50 metre-high Olympic Hill or the Olympic Tower (290m) are good spots to view the roofs of Munich and the mountains beyond, and there is a Sea-life Centre in the Park.

The Allianz Arena is one of Europe’s most modern and visually impressive football stadiums and home of FC Bayern München since 2006. The Arena behind-the scenes tour starts with a film telling the story of the Allianz Arena so far. After that, the guided tour takes in the upper tier, the sponsors’ lounge, the stadium interior, the press club, the dressing rooms, the player’s tunnel, and the outside of the stadium.

The Museum, designed in the shape of a futuristic silver bowl, presents the history of BMW from 1916 to the present day. A large collection including engines, turbines, aircraft, motorcycles, and vehicles shows BMW’s technical development throughout the company’s history. There is also a look into future technologies. Current topical themes are explored such as alternative propulsion methods and, recycling.

This is a car collection point for new owners and a BMW brand themed attraction showcasing technologies, engine construction and the design process. It offers a wide range of activities and exhibitions which combine engineering, design and innovation in an impressive modern building. Experience BMW, MINI and Rolls-Royce at BMW World.

Marienplatz is dominated by the New Town Hall built in Flemish Gothic style in the 19th century. At 11.00 am, 12 and 5pm visitors watch the famous Glockenspiel or carillon, where figures perform a dance, originally performed in the Middle Ages, to mark the end of the plague. The Old Town Hall (Altes Rathaus) was originally built in the 15th century, and was reconstructed in the original style following destruction in WWII.

Experience the world of science and technology, from their origins to the present day, in 50 exhibition areas covering some 47 000 square metres. Highlights include the first motorised aircraft built by the Wright brothers, the U1 submarine, Conrade Zuse’s Z3 first programme controlled computer and Diesel’s original engine.  The museum also provides an opportunity for some hands-on experiments.

This world class art museum features works from the Middle Ages to the mid-18th century and is one of the world’s most important collections of European paintings. It displays more than 800 paintings and includes works by Durer, Rafael, Leonardo da Vinci, Titian, El Greco, Rubens, Rembrandt and Boucher.

The Neue Pinakothek has outstanding works of European art and sculpture from the late 18th century to the early 20th century, including Gainsborough, Goya and David. There is a significant collection of Impressionist works by such artists as Monet, Manet, Degas, Pissaro and Renoir together with works by Cezanne, Gauguin and Van Gogh.

Four outstanding collections offer an extensive overview of fine applied arts of the 20th century right up to the present day. The museum includes a collection of Modern Art, Munich’s International Design Museum, an Architecture Museum and a Museum of Graphic Art. The contemporary collection of Modern Art offers a journey starting from Expressionism, New Objectivity and Surrealism up until the present day.

Opened in 2009, this modern museum with its distinctive architecture houses over 1,000 works of art from 1945 onwards. The collection includes paintings, sculptures and drawings, including works by Cy Twombly. There is a large range of work by Andy Warhol. Other well-known artists represented are Joseph Beuys, Mario Merz, Jannis Kounellis, Sigmar Polke, Georg Baselitz, Gerhard Richter, Damien Hirst and Bruce Nauman.

This impressive Royal Palace in the city centre is a complex of buildings of different architectural styles, Renaissance, Baroque, Rococo, and Classical. It was the residence of the rulers of Bavaria for five hundred years.  Now a museum 130 rooms display period furniture, paintings, tapestries and porcelain. The Treasury contains a unique collection of gold dating from the Middle Ages.

The impressive royal Palace was built in 1664 for the Bavarian Elector as a gift to his wife on the birth of their son and heir. Visitors can enjoy the magnificent State rooms, banqueting hall and Ludwig 1st Gallery of Beauties. Highlights are the bedroom where King Ludwig II was born, fine ceiling frescoes by Johann Baptist Zimmermann and extensive gardens.

Close to the Marienplatz, this modern museum gives an insight into Jewish life and culture in Munich and provides a wealth of information about Jewish Heritage and religion. The Permanent exhibition “Voices_Places_Times” considers the diverse aspects of Jewish identity and Munich’s Jewish history. Seven installations give insight into Jewish life and feature the voices of contemporary eyewitnesses.

This modern documentation centre opened in 2015 on the site of the former headquarters of the Nazi party to inform and educate visitors about the Nazi period and its crimes. Topics include the rise of the Nazi movement in Munich and the role played by the city in its terror system. It also examines the difficulties faced by the city in dealing with its National Socialist past after 1945.

The camp for political prisoners served as a model for later concentration camps. 200,000 people were imprisoned here and in the subsidiary camps and 41,500 people were murdered. Today an exhibition gives an overview of the history of the camp and explains the original use of the exhibition rooms. The grounds can be visited together with a model barrack, the crematorium and other exhibitions.

Half day See on map
18 The Travelbound Munich Quest

A self-guided walk takes students on a discovery of the wonders of the amazing Bavarian capital. The quest, punctuated with a wide range of head-scratching tasks and challenges, takes in many iconic sights including Karlsplatz and Viktualienmarkt. An enjoyable mix of treasure hunt-style clue solving and team activities keep students engaged until the very end when the winning team is finally revealed. Enrichment or MFL version available. 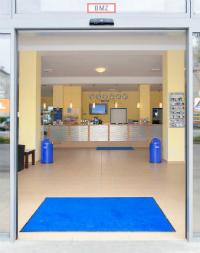 Cologne has no less than seven Christmas Markets in the city centre, each with their own special character.