Our 3-day tours to the Ypres Salient & Somme Battlefields will help your university or college History course students understand the sacrifices of WWI from every angle. We specialise in building extensive tours for your students and you.

Please contact us for a price
FEDS - Belgium and Netherlands - Generic

A great travel company with knowledgeable staff, great value for money and honesty with you right from the start

The area surrounding the river Somme saw some of the harshest fighting during WWI and has numerous memorials dedicated to those who lost their lives including the trenches at Beaumont Hamel, the Memorial to the Missing at Thiepval, the Lochnagar Crater and museums at Albert and Peronne.

The network of tunnels under this town was used as shelter in World War I and II and is now home to the 1916 Museum. Descend into the tunnels where dioramas and photographs depict life for soldiers in the trenches. Many relics such as uniforms, weaponry and personal souvenirs are on display, and groups can have the opportunity to handle these by pre-arrangement.

The names of 73,357 British and South African Men are inscribed here at Thiepval, the largest war memorial in the world. Having fallen on the Somme between July 1916 and March 1918, the soldiers have no known graves. Extensive wartime tunnelling beneath this structure on the Western Front has meant that 6m thick foundations were required. There is also an informative visitor centre.

The Battle of Vimy Ridge is a Canadian nationalistic symbol of sacrifice and achievement. The Canadian National Vimy Memorial is on the highest part of the ridge; an august structure that commands inspiring views over the Douai Plain. Guides are located throughout the site to provide interpretive information at various parts of the site.

The slopes of Hill 62 were part of the front line in 1915. The museum at Sanctuary Wood is one of few sites on the Ypres Salient battlefields where an original trench layout can be seen, relatively unchanged since the war. Most farmers returning to their plots would plough over the scarred land, but here sections of the system were left intact. Photo © Amanda Slater.

This British trench wasn’t discovered until 1992 by a group of archaeologists who went on to excavate tunnelled dugouts and soldier remains. One of the few sites with original trenches on the Ypres Salient, the location exhibits very narrow networks with recreated fire steps and loopholes. Students can get a real sense of the space the soldiers occupied.

This is a Somme battlefield memorial to the men of the 36th Division who suffered horrendous losses on the first of July 1916. The Ulster Tower is a replica of St Helen’s Tower, which sits in the grounds of the Clandeboye Estate in Northern Ireland where much of the division trained. Photo © Eoghan Olionnain.

This small village lies on the top of the ridge that formed the centre of the British sector of the Somme battlefield. It’s elevated locale made it strategically critical to both the allies and Germans and it was completely destroyed in the Battle Of Pozières (1916). The village was rebuilt with a number of significant war memorials in commemoration. Photo © Through These Lines.

Based on the famous Astérix books, this is the second-largest theme park in France. It is set in the forest 30km from Paris and has lots of attractions to keep students happy, from Goudurix, the roller-coaster that turns you upside down seven times; to log flumes, river rafting and a ghost train. Themed areas range from Gaul to Ancient Greece and Egypt. 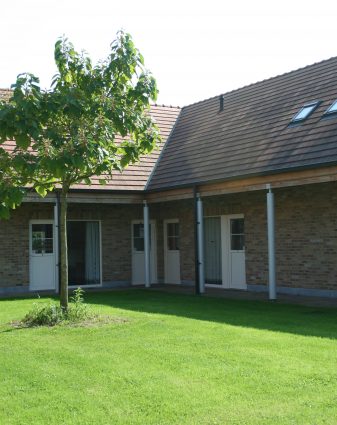 Located in Messines, Belgium’s smallest city
Located to access all the cemeteries
32 bedrooms with en-suite rooms

On a university or college trip to Berlin, your students will discover how the city draws in visitors and tourists with its unique blend of artiness, history and modern efficiency.

Celebrate Italian fashion and indulge in some retail designer outlet shopping with a memorable trip to stunning fashion hub, Florence!

This small city packs a punch with its art, from treasures of the Golden Age to blockbuster shows at the Hermitage.